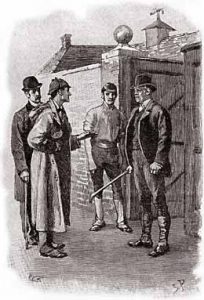 So what have Fraud Detection Techniques and Sherlock Holmes got in Common?

RECOGNIZING WHAT IS MISSING

In Arthur Conan Doyle’s short story ‘Silver Blaze’, Sherlock Holmes has to solve the riddle of a missing race horse and a murdered stable boy. The solution to this case depended on a detection technique that’s far from new, but that investigators sometimes overlook – looking for what is missing.

In Doyle’s tale, Sherlock Holmes noticed that a typical and reasonable occurrence mysteriously had not taken place in this case. It all began in the dead of night when a fraudster abducted Silver Blaze, a champion stallion, from its guarded stable. The horse’s groom could not alert anybody because the thief had drugged him. But that was not all.

Here is how Dr. Watson chronicled Holmes’s detection of a further clue: the stable guard dog had never barked.

” ‘Is there any other point to which you wish to draw my attention?’ [Gregory asked Holmes].

‘To the curious incident of the dog in the night-time.’

‘The dog did nothing in the night-time.’

‘That was the curious incident,’ remarked Sherlock Holmes.”

And so as Sherlock Holmes identified the perpetrator of the crime through identifying something that should have been there but wasn’t, we can apply the same technique to analysing data to identify potential fraud. So rather than looking for the presence of something as being the anomaly, we should also look for the absence of something.

If you like this tip you might like our unique guidance and tools which are packed with lots of similar tips and tricks, as well as providing a complete toolkit to help you build an holistic fraud strategy.

Tip 5 – Anatomy of a fraud – The story of a convicted Criminal: Walt Pavlo
Tip 7 – Do you have effective whistleblowing procedures?