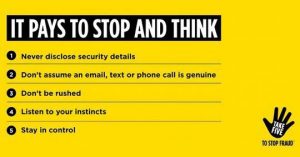 One of our members has just alerted us to a variant on a bank telephone/text scam and the person concerned had £800 taken from their bank account by fraudsters – so please be aware:

The individual received a call from someone pretending to be from their bank – even the number which came up on their phone showed as being their bank (known as phone number spoofing). They did not ask for any identification (which makes sense, as you would not want to give out anything confidential) but said to the victim that they thought someone was acting fraudulently on their bank account.

So the fraudster said that they would arrange to send a code via text to the victim’s mobile phone (whilst they waited) and asked that they read it back to them to prove their identity and enable further investigations to proceed. The victim received the code via text (which also showed as being from their bank as the telephone number had been spoofed) and passed it on as requested.

The next thing they knew was that £800 was fraudulently taken from their bank account.

It would appear that the fraudsters who called were, at the same time, carrying out a transaction online using the victim’s bank card details (which they had obtained elsewhere) and this triggered the bank to legitimately send the victim a text code – so the real fraudsters called the victim to obtain this code from them and then input it online at their end to complete the transaction !!!

What can you do?

Remember never ever get caught out in this way – you will only ever be sent a text code where YOU have initiated a transaction. Your bank will NEVER call you and use a code to identify you. If you receive a call and a code, the chances are that it is YOU who is being caught out, in which case immediately telephone your bank (using the number you know as being correct).

You can also report the fraud to Action Fraud using its online reporting tool. Please note this tool will not result in an investigation of your case but will be used by the police to build a picture of these types of scams which may help prevent future incidents. Its website also has useful resources including factsheets and infographics.